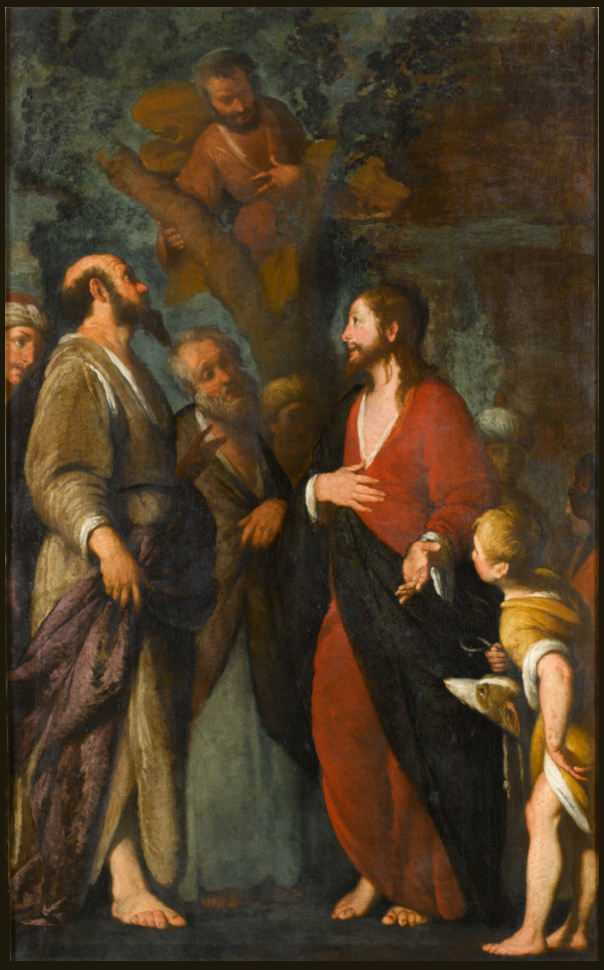 This Sunday we are once more presented with a tax collector receiving the mercy of God. Last week you might remember we had the parable of the tax collector and the Pharisee in the Temple. This one is that short man named Zacchaeus. In the New Testament, tax collectors are lumped together with prostitutes and other sinners. Why? Why did Jesus and all the Jews consider tax collectors sinners? They were sinners because they collaborated with Rome. They used the power of Rome to steal from their own people. They became rich without doing anything more than sitting behind a table imposing taxes on their fellow Hebrews. The way taxes worked in the Roman Empire was that the Romans enlisted the help of locals offering them a lucrative living for collaboration. Their salaries actually came from their own people. The tax collector got a percentage of the tax, so he would set as high amount of tax as possible. If anyone protested, well, behind the tax collector’s table there was a cohort of Roman soldiers to keep the peace as the tax collector, if you excuse my pun, took his piece. So a tax collector was a thief, and worse than a thief, he used the hated Romans to steal from his own people. The tax collector in last Sunday’s parable knew he was a sinful man, and stood in the back of the Temple praying, “Lord, have mercy on me a sinner.” That was quite different than the prayer of the Pharisee who was in the Temple to remind the Lord what a great guy he was. In last week’s parable, the tax collector left the Temple in the embrace of the Lord. Today, we have Tax Collector Part II. This tax collector is not a person from a parable but a real life man named Zacchaeus. He was curious, but he was also short. He couldn’t see Jesus, so he climbed that sycamore tree to get a better look. He must have been shocked that Jesus would call him out of the tree and tell him that he would eat at his house that evening. Having a meal with someone is a gesture of friendship, even more, it is a gesture of intimacy. The Lord wanted to be part of Zacchaeus’ life. Many people grumbled at that, but Zacchaeus, the little man, stood his ground and gave half of what he had to the poor, promising to repay fourfold those he had cheated. Zacchaeus responded to the mercy he had received. How have we responded to the mercy of God we have received in our lives? Do we take it for granted and go on with our lives continuing to sin, or do we really try to change our lives? Saying, “I’m sorry,” and seeking mercy is good, but only if we intend to respond to the mercy we receive. A number of years ago a young couple came to see me who had a problem in their marriage. The problem was that the husband kept misbehaving, spending money foolishly, not coming home when he said he would, not carrying his part of the household load, etc. After the wife had her say, I asked him if he had anything he’d like to add or subtract. He said, “But I always tell her I’m sorry.” She said, “Yes, he does, but he is not serious about being sorry. He just says the words and then continues doing these things.” You see, it is not enough to say that we are sorry and receive forgiveness. We have to do all we can to change our actions. When we say the act of contrition, we express our determination to amend or change our lives. Sometimes, when I say to the Lord, “I’m trying,” I hear Him say to me, “Well, try harder.” There are times that we treat the sacrament of Penance like a car wash. Get in, get washed, get out and don’t worry about getting dirty again. Pope Francis said that there are no limits to God’s mercy. The only limits are the ones that we put on his mercy. Sometimes those limits are refusing to ask for mercy. Sometimes those limits are refusing to respond to mercy. There are times that all of us are upset with ourselves for our own refusal to respond to the Lord’s mercy. Instead of changing our lives, we transfer our upset onto others. We use our view of their foibles and their sins as a way of hiding our own sins. That is why that instead of responding to the mercy we have received by being merciful to others, we behave like the man in another parable who had a huge debt forgiven but who refused to forgive the small amount another man owed him. That man would have been more merciful if only he had worked hard to fight sin in his own life. We all would be more understanding of others, if only we would put up a serious fight against sin in our own lives. When the Lord entered Zacchaeus’ home, Zacchaeus said, “Things have got to change.” That’s the reaction we have to have when we realize the “all-surpassing good we have been granted in Jesus Christ,” to paraphrase St. Paul. Things have go to be different. We have to fight sin. We have to embrace the Lord. Our avoidance of immorality, our decision to bring prayer into our homes, and our determination to make choices that may not be popular with others are all part of our decision to be different, our decision to be holy. Tax Collector, Part 2, the story of Zacchaeus, challenges us to respond to the Lord’s mercy by waging war against sin in our own lives.